If your family is like mine, I’m *guessing* you’ve been watching a few more movies than usual. We’ve officially adopted Friday night movie night, and – alongside a slice (or three) of pizza and salad, we gather on the couch for an evening of family entertainment time.

One new movie, that I was *so* excited to see, is PRAY: THE STORY OF PATRICK PEYTON. It’s is an inspiring documentary about a poor, uneducated Irish immigrant who sets sail for America in 1928 with nothing but his faith and dreams of becoming a millionaire. Arriving in Pennsylvania and unable to find work, he accepts the position as a janitor at the cathedral, which rekindles his long lost desire to become a priest and changes the course of his life. Nearing ordination, his life takes a radical turn when he is stricken with tuberculosis. Facing certain death, he sinks into despair. A visit from his mentor, who delivers a simple message to pray, lifts the darkness. Taking his advice to heart, Patrick prays fervently to Mary, the Mother of Christ, for her intercession and he experiences a miraculous recovery. Feeling deep gratitude, he dedicates his life to telling all the world about the power of prayer and encourages families everywhere to bring prayer into their homes. Never taking “No” for an answer, he convinces Hollywood’s biggest stars to help him spread the message, “The family that prays together stays together,” through the power of mass media including radio, television, and film. Father Peyton’s fame spreads around the world and audiences in the millions flock to his public prayer rallies. This is the story of a tireless missionary, an unlikely hero, and one of history’s greatest advocates for family prayer.

How amazing does this movie sound?!?

From a personal perspective, I grew up hearing the phrase that “The Family That Prays Together Stays Together,” but until now, I never really knew its origins. Learning about Patrick, a simple Irishman who brought his message to Hollywood (go big!) – and then around the world (go bigger!) – is just so inspirational. Through it all, he remains a humble Irish priest, in love with Our Lady, spreading the most important message: just pray.

PRAY is out in theatres on 10/9, and tickets can be purchased here: PrayTheFilm.com (note that my web browser gave me a warning when I clicked…just proceed through). I encourage you to go view this film…the inspiration behind this amazing man’s ability to move mountains is the perfect lead into the upcoming busy season; it will keep your heart focused, and inspired, for months to come. 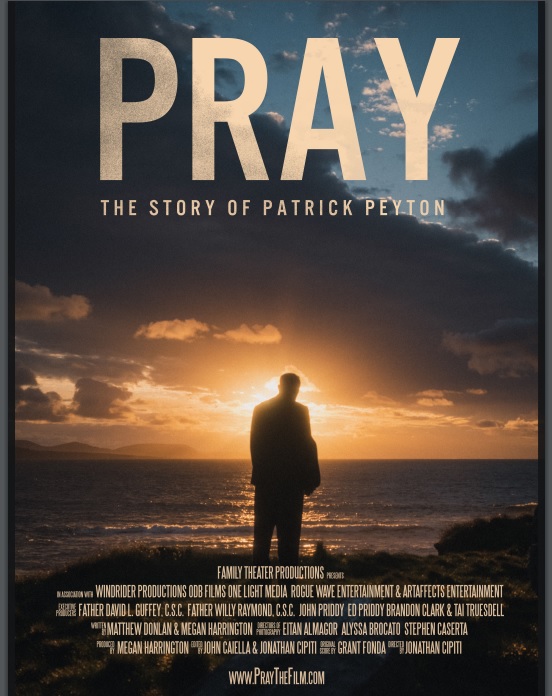