Please allow up to 14 days for fabrics purchased in our shop - thank you!

Saint Cecilia, celebrated since the fourth century, is the patron saint of musicians. Cecilia was a noble lady of Rome who, alongside her husband Valerian, his brother Tiburtius, and a Roman soldier named Maximus, was martyrdom around the year 230 AD under Emperor Alexander Severus (though other ... END_OF_DOCUMENT_TOKEN_TO_BE_REPLACED

There are so many good books out there, and it's been such a pleasure these past few week to share my new book, Make Every Day Blessed: Living the Liturgical Year  alongside my two friends as *they* release their two books! Each of these there books are journal-inspired, which means that - as you ... END_OF_DOCUMENT_TOKEN_TO_BE_REPLACED

I’ve been reaching out in prayer to this man lately, asking what I can do and how I can be part of the change that is so badly needed. As the first black saint in the Americas, he is the patron saint of racial and social inequality as well as well as barbers, hairdressers, and radio. St. Pope ... END_OF_DOCUMENT_TOKEN_TO_BE_REPLACED

Some fabrics are more fun to design than others, and St. John the Baptist was definitely on the fun side! There were so many creative ways to depict him - the Godly untamed man in the desert, eating locust and honey, wearing a hair shirt, doing baptisms in the Jordan River...so many ways! In this ... END_OF_DOCUMENT_TOKEN_TO_BE_REPLACED

Welcome to our beginner sewing class on sewing your own face mask from our gorgeous faith-filled panel! Face masks have become a part of our reality - and the longer they are needed, the more important it is to have extras on hand. One wonderful trend, if you will, with the masks is the ... END_OF_DOCUMENT_TOKEN_TO_BE_REPLACED 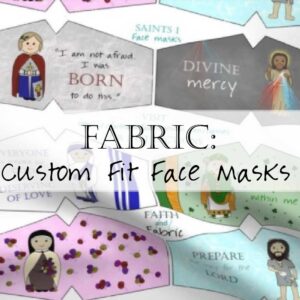 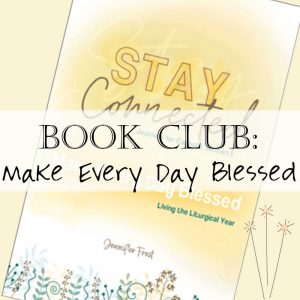