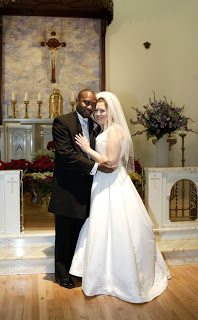 Now I am a stay-at-home mom, taking care of our children and trying to keep up with the housework. He works hard to let me stay home to take care of our kids.  Every time I go to a wedding, I remember how thankful I am to God for putting my husband in my life.

When we began dating, some of my family members were not too excited for us, as they did not like the color of his skin.  My mother said that I could be friends with anyone, but when it came to her future grandchildren, she didn’t want them to be mixed race.  I think my mother grew up in a different time when race was a larger issue.  Thankfully, as they got to know him better, they grew to like him and the skin color no longer mattered.  From what my husband says, I think his parents felt similarly, but they accepted me with open arms when I went to Kenya to meet the family.

When we got engaged, we planned to get married in the United States and figured a year would be enough time for his family to get passports, visas, and plane tickets to come to our wedding.  It was
not enough time, but that might be because they did not start the processes of getting their passports right away.  In the end, after many phone calls the month and week before our wedding, the earliest his parents could get to Southern California was 5pm the day of our wedding.   It was scheduled at 10am.  His parents were not at our wedding, and I know that made my husband very sad.  There were Kenyans that live in the United States at our wedding, and they did a traditional Kenyan song and dance at the reception.  I know that did not replace the fact that his parents were not there, but I think it might have helped him feel more at home.

In Kenya, giving birth to children is something women do and men are not present for.   Thankfully I was informed of this before we got married, so I knew that my husband would not be there at the
birth of any of our children.  I know it used to be common not to have the father present at the birth of children, but during my lifetime it has been common that the fathers support the mothers during childbirth, so I always expected that my husband would be with me.  My mother has been my support person for the births of all my children.  And it has worked out wonderfully, as she feels honored to be there when her grandchildren are born and she is supportive, calm and helpful through it all.  My husband waits in the waiting room and comes in as soon as the baby arrives.

In Kenya, grandparents name their grandchildren.  My husband wanted to honor that, but I was hesitant to give up what I felt was something I had a right to do. We compromised on this and the grandparents give each child one name, and we pick the other name.  All of our children have a Saint name as their first name and a Kenyan tribal name for their middle name.  When it is the paternal grandparents turn to name the child, they pick the Kenyan tribal name.  When it is the maternal grandparents turn to name the child, they pick the Saint name.   My husband and I pick the other name.  Now that I am accustomed to it, I think it makes it easier, as I only have to agree with my husband on one name, not two.  My parents are honored they get to pick names for their grandchildren, as they never expected they would be given that opportunity.  And so far, all the grandparents have picked wonderful names.

Our children have never been to Kenya, and their grandparents have not been to Southern California since right after our wedding.  They have never met each other, and that makes me sad.  We would love to take our children to Kenya, but we have not been able to afford it.  Every time we have another child, the price goes up as we would have to add the cost of another plane ticket to make the trip.  We still live in Southern California to be close to one set of grandparents.  We think it is important for the children to have their grandparents around….and the free babysitting is nice too.  And maybe someday, we will be able to afford to go to Kenya or pay for my husband’s parents to come here.

Will we ever move to Kenya?  I know my parents and siblings would prefer that we did not; they would miss us.  But it would give my husband’s side of the family time to get to know all of us.  I know it would be hard for me to adjust.  I only speak English, and while English is one of Kenya’s national languages, most people there speak English, Swahili and a tribal language.  So I would not understand a lot of what was going on, and I would have some learning to do.  I love my water heater too and most homes in Kenya do not have them.  I also know the culture infers a lot of things that do not need to be said or things are said in a roundabout way, I would have to learn all of that.  I know my husband would like to stay in the United States for his working career, assuming he can find and keep a job, which has been tough some years.  But when I got married to a man from Kenya, I knew moving to Kenya would be a possibility and I will if necessary in the future.

We were both raised Catholic, and see that as the unifying thread.  We both want to know, love and serve God and teach our children the same.  As with any marriage, treating your spouse with love and understanding is extremely important to keep your marriage strong.  With a cross-cultural marriage, the understanding part may take a little more effort as your spouse may think differently than you due to his or her upbringing and cultural background.

The Catechism of the Catholic Church states, “Marriage helps to overcome self-absorption, egoism, pursuit of one’s own pleasure, and to open oneself to the other, to mutual aid and to self-giving” (1609). The selflessness required in all marriages is a beautiful reminder of God’s love for us and can help us to grow in love for God.

Andra Kariithi is a stay-at-home mom with three children and has been married to her husband Edward for eight years. She is a member of The Goretti Group, a Catholic non-profit ministry inspired to mobilize the community to embrace and further the virtue of chastity. Based out of San Diego, they reach out nationally to untwist the false images of love bombarding our culture and help countless hearts experience the joy of purity through their speakers bureau and membership outreach. Check it out at www.thegorettigroup.org!
~~~~~~~~~~~~~~~~~~~~
Return to Hot Summer Nights
(Visited 279 times, 1 visits today)
Previous Post: « HSN: Displaying Christ’s Glory in your Marriage by Melinda Murphy
Next Post: Book Club: When God Intervenes »